As a founder member of the Stonewall Immigration Group, this October marks 25 years since the organisation spearheaded a landmark change in the history of LGBTQ+ rights in the UK: the first recognition of lesbian and gay relationships in British legislative history.

On the 10th of October 1997,  a very courageous (as Sir Humphrey would have said) Immigration Minister, Mike O’Brien, made history by recognising same-sex couples for immigration purposes. It was the first positive LGBTQ+ legal change since 1967 and the very first lesbian and gay issue that the New Labour government dealt with.

Such legislation was hugely progressive against the backdrop of a conservative and anti-immigration political climate. Evidence of this opposition was still ongoing in 2000 from numerous publications which tried to discredit the achievement of our team (now Rainbow Migration) through unfounded stories. 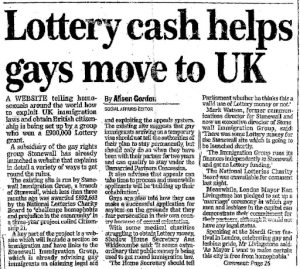 In 1993, when the campaign started, it was considered impossible by nearly all legal professionals. Even Stonewall thought it was too controversial to win – their view at the time was that we had to first campaign for gay marriage and then get immigration rights.

Previous immigration Ministers had always relied on the fact that same-sex relationships weren’t recognised in English law. So it would be illogical to recognise them in immigration law. However, in 1997 Mike O’Brien turned that on its head, and there is no doubt the recognition in immigration law made civil partnerships and gay marriage happen much sooner than they would have.

I believe it also emboldened the Labour government to act faster on other LGBTQ+ issues, and in 1998 MPs voted for an equal age of consent, and in 1999 Tony Blair lifted the ban on gays in the military. This was also an incredible campaign led by Rank Outsiders, another group that most people haven’t heard of, but similarly made a huge difference to the brave servicemen and women who were humiliated, disgraced and kicked out of the armed forces just because of their sexuality.

Same-sex adoption was allowed in 2002, followed by civil partnerships in 2004.

There is an excellent history of the immigration campaign written by Wesley Gryk, one of the other founders of the SIG. There is also a BBC documentary highlighting the issues same-sex couples found themselves in. At the time, there were no legal ways for couples to stay together. Many ended up in marriages of convenience, leaving themselves open to threats with no legal protection. The absence of equality was compounded by the fact the Home Office had a concession at the time to allow married men to bring an overseas female mistress into the country if they wished. 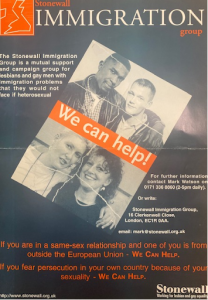 The campaign was both political and legal, and thanks to the huge effort of solicitors, Wesley Gryk and Matthew Davies (both group founders), we achieved what nearly everyone thought was impossible.

Every month without fail, they would attend meetings and not only inspire couples to do the right thing but would stay, often for hours, to ensure everyone (sometimes over 200 people) had an opportunity to speak to them individually.

This compassion starkly contrasted with the Home Office, which callously disregarded people’s long-term loving relationships. Hundreds of couples were saved from breaking the law because people trusted the SIG solicitors – when most legal and campaigning organisations thought the cause was hopeless. Their faith and skill kept people together long enough for the political campaign to bear fruit. Not a single couple who followed the group’s advice were forcibly separated.

But this came at a cost.

Foreign partners of lesbian and gay UK nationals were trapped in the UK for years whilst their applications went through the courts. They often had to choose between attending parents’ funerals or staying with their partners (made even more difficult to explain if they weren’t ‘out’) – because if they left the UK, they would never be able to return. Or athletes competing at the international level – choosing their partner over everything they had dreamed of.

But the campaign was successful for this very reason – there was no choice but to win – people had sacrificed so much to be with their partner that losing wasn’t an option.

When Mike O’Brien spoke politely and positively at one of our events shortly after becoming the Immigration Minister, I asked him to stay for a few minutes to speak to some couples and hear their stories.

After talking to just a few people, he took his jacket off, rolled up his sleeves (it was a warm, packed room) and cancelled his other events. He spoke to nearly every couple in the room, and when he left two hours later, he said this is an issue we really need to look at – it was clear that this time he actually meant it. 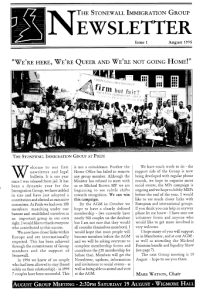 I don’t know what battles he fought internally to get the change through – and the initial change wasn’t perfect – but it did change LGBTQ+ history and the lives of hundreds of couples.

So when people say politicians are all the same, I can tell you categorically they are not – it’s easy to forget sometimes that there are good people in politics, and I doubt many people will remember Mike O’Brien but he did make a huge difference – not just to those couples affected, but the ripple effect of that one positive action multiplied and changed thousands of lives for the better.

As the former Communications Director at Stonewall, I worked on nearly all the LGBTQ+ campaigns during the 1990s but I believe few organisations have achieved so much so quickly on an issue so controversial as SIG.

As Margaret Mead said, “Never doubt that a small group of thoughtful, committed citizens can change the world; indeed, it’s the only thing that ever has.”

As a small thank you for all the hard work of the solicitors and campaigners, to the brave couples who made those enormous sacrifices and to the ‘courageous’ Mike O’Brien, Fat Beehive will be sponsoring the 25th-anniversary celebration on the 19th of October 2022.

Black in Tech: Positive Action to increase diversity in tech